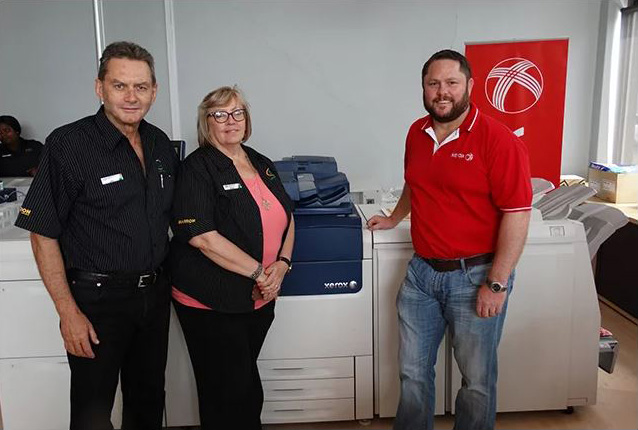 Two-and-a-half years ago Minuteman Press Silverton purchased a Xerox Versant 80 press and began its relationship with Compleo, a Xerox Platinum Partner, and Altron Bytes Document Solutions (BDS). This relationship has continued to grow with the company recently installing the Xerox Versant 180 to supplement its production capacity.

Minuteman Press Silverton first opened in 2006 when husband and wife IT team Leon and Wendy Krause were looking for a franchise opportunity. Following the successful franchise appointment and training, the Silverton branch was established in 77sqm metres and has grown rapidly ever since.

Minuteman Press Silverton is now a full-service print provider with its production printing handled exclusively by Xerox production devices. In the early years of the branch, digital printing was handled on presses from another supplier and also on a litho press. According to Wendy, the change to Xerox and the Versant 80 was made due to the printing capabilities of the Xerox device as well as its ability to handle a wider range of printing stocks including gloss substrates.

Rapid growth has seen Minuteman Press Silverton move to new premises over the years and its latest move to Six Fountains Adventure Centre in Silver Lakes brings with it the increased opportunity for foot traffic as well as the installation of the new Xerox Versant 180. Wendy commented, ‘Our experience with the Versant 80 and, following that, the D125 monochrome press gave us complete confidence to go for the Versant 180 when we needed additional production capacity.

Our experience with Compleo and Bytes Document Solutions has always been very positive. We have received the best possible prices and the service is second-to-none. Not only are the technicians always available but, they offer value-added service without even being asked. They go out of their way to ensure that we achieve maximum productivity.’

The Versant 180 at Minuteman Press Silverton was installed at the end of January this year and went straight into full production. According to Wendy, only limited training was required because the operation is essentially the same as on the existing Versant printer. It is capable of printing up to 80 pages per minute. The RIP processes pages at 2400 x 2400dpi x 10-bit image depth giving a maximum print quality of a full 1200 x 1200dpi, achieving vibrant prints on a wide range of stocks ranging from 52 to 350gsm in full duplex printing. It can also handle simplex printing on stocks up to 400gsm.

Wendy concluded, ‘We are extremely satisfied with the productivity and quality we achieve on the two Xerox Versant presses. It is obvious that we will continue to grow with the increased volume of business we are receiving here, and due to the higher volumes, we are able to produce with the speed and reliability of these presses.’

Altron Document Solutions has completed the installation of the @Xerox Versant 180 to supplement the production capacity of the new Minuteman Press store in Rosslyn.

Did you know you can earn up to 89% more for CMYK+ enhancements over CMYK alone? Up your profits with Xerox® PrimeLink®.

Devices at home with home workers can now be monitored, keeping costs under control and your workers more efficient.

Achieve seamlessly consistent, flawless quality from your first print to your last with Xerox® PrimeLink®. Contact our sales people to find out more: marketing@bdsol.co.za or 0800 117 843